Her mother only stepped up to the plate once Vera's father died. That was probably the worst day of her life. She remembers it so clearly: being pulled out of class one morning and being told that her dad got in a fatal accident on the way to work. At least she got to say goodbye before he left. But she wished - she still wishes - that she got to say just a little more.

The following years were a fucking nightmare, in her own words. Her mother cared little about Vera's wellbeing and was really only around for the meager monetary benefits. She did the bare minimum and Vera was always too afraid to tell anyone how lonely she felt. It was a very volatile enviroment - lots of verbal and sometimes physical abuse being hurled around. She sought solace in online communities, specifically ones centered around sharing violent and explicit media. In her mind, seeing someone else take the pain for once felt almost cathartic. Eventually though, watching it just wasn't enough.

Because of her life basically revolving around violence, she developed self-destructive tendencies and anger issues. She thought of herself as someone not worthy of positive relationships; as her mother put it, she was like a "bad luck charm". Everyone else would be better off if she'd just kept to herself. After just barely graduating high school she scrapped together money earned from shady online gambling sites and moved into the Levite Towers, where she currently runs an underground forum much like the ones she used to frequent as a teen.

But then... it all started with her winning a free dinner at the local Chinese place, only to find a dead body in the kitchen. The events that followed in the following months were unexpected, to say the least: being stabbed 30+ times, learning blood magic, finding out her hometown is built on ancient, Lovecraftian evils. That kind of stuff.

It's not easy, but it's not like she has anything better to do.

-There's a noticeable gap between her front teeth. She hates it but doesn’t want to get braces (especially now).

-Though she puts up a hard-ass exterior, she isn't a mean person. Well, she really tries not to be.

-She doesn’t consider her life to have much worth, not in a depression way just very matter-of-fact. Because of this she's pretty reckless and often doesn't think twice before putting herself in harm's way.

-She only smokes menthols and will politely decline any other kind of cigarette.

"Does she have Limp Bizkit on her playlist?" - my friend Adrian 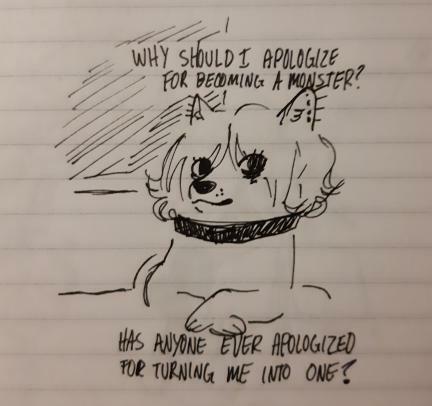